From Le Lavandou our way almost led us to Saint-Tropez. But the driver, who gave us a lift, told us that Saint-Tropez is a small, hellish expensive and fully private town. Beach is solitude and clean – because the coast belongs to hotels and closed to all non-guests.

And we decided to go to Saint-Maxime that is a bit closer to Cannes. Before we bought a 1.2 liter bottle of “Desperado” – beer + tequila. And dropped to the cover concert of Rolling Stones on the St.Maxime’s beach. A couple of kilometres from party  – and we found a cosy sandy beach, where stopped for the night, in a couple of meters from the sea.

The next day – in Cannes. This city doesn’t impress at all. And hell of Russian tourists everywhere.

Red carpet beyond the event – just a carpet on a staircase of Palais du festivals and et des congres. The palace is in two steps from a beach. Prints of hands of celebrities – funny idea : )

Boulevard de la Croisette – a nice place to have a walk, with expensive hotels on one side and the beach – on the other.

The most spectacular place for me – Allee de la Liberte. There’s a biiiiig flee and antique market here. Just have a look – I never was on a market, where were so many attractive and beautiful things! Not cheap tho.

We headed to the oldest part of the city – Vieux Port – a huge marina. This kind of place have all French coastal big cities.

We do not search for easy ways and left touristic paths. The reason was a map, where a place called “Parcours plein air” was pointed. I was interested to see what’s that, remembering my parcour past. What I expected was a huge training park with obstacles of any kinds (remembering that French nation by David Belle started this performance).

So for the next 30 minutes we climbed the hill, where a huge Parc Naturel was situated. By the way, we still carried our bags, because there’s no place in Cannes where we could leave them. The only railway station was on reconstraction.

So that day we got the taste of mountain trekking. Parcour plein air appeared to be just a path with some simple spots for general training – nothing spectacular at all. We tried to find some “awesome” views pointed on the map – and almost got lost. Anyway, in this place nothing reminds about touristic noisy city down the hill – and that was a pleasant relief. 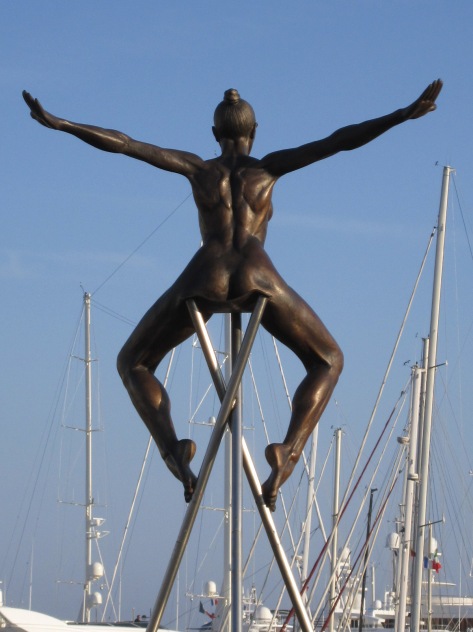 What can I say… this southern city didn’t rise any feeling in me. At first glance everything is on place: beautiful, warm, cultural and rich. But… c’est la vie, I don’t think we’ll see each other again, Cannes!