My father was a fan of Formula One. He read same-name magazine, knew all pilots – old and new, and studied schemes of tracks all over the world. Day of race had been always a specail day for him, and he was awaiting for it long time before.

I didn’t share this passion, as that was with interest to soccer. But when I ended up in Sao Paulo, actually, the only thing I really wanted to see was a track of F1. This trip was devoted to my father.

All that I’ve heard about Sao Paulo before hardly raised curiosity.

In Sao Paulo business and money are concentrated. And it’s logical that this city was chosen to build a track for F1 race.

We went to Autodromo Jose Carlos Pace on Friday, when practice has started. Sao Paulo never sleeps, so traffic is pretty heavy on all hours of the day. Going in a thick car stream, we had heard squeak of F1 bolids long before we saw the autodrom itself. 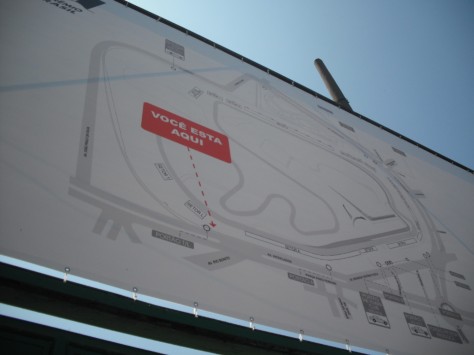 Pre-race mess has already overwhelemed the place. Road policemen whistle, regulating a mass of cars. We’ve been searching for a parking place for about 20 minutes. Not only all of them are occupied – mostly by police and services, but also it’s prohibited to stop in an area close to the autodrom.

Car dealers prepare their stages along the road, girls from support teams crowded nearby. Vendors sell earplugs and tickets on ridiculous price, probably, fake – 50 reals against 150 reals of official price in a ticket office. (150 reals = about 70 euros). That’s just to see practice. Tickets on a race itself go up to thousand reals and are sold long time before the event.

Cars sweep behind the wall with deafening swish. Despite high prices, people wait in line in order to buy a ticket. We pass  them, and head to policeman.

– Is there a place outside to have a quick glance on a track?

Police is nice and doesn’t send us to hell straight.

Unfortunately, all holes that were made by curious citizens and tourists do not give any decent view. Moreover, dozens of policemen all around apparently do not encourage this kind of activity. So we went home.

The race is today at 14:00 Brazilian time. Sebastian Vettel (Red Bull) got his 15th pole position after qualification in Brazilian Gran Pris – and with that has beat a previous record of 1992. Pilots will make 305,909 km on a 4309 m long circuit – and that’s 71 circle. This is the last race of 62d World Championship Formula 1.